by dave
in Chai Latte Recipes and Tips

Anything chai-spiced gets us going here at Aura Chai… but I am particularly excited to post this recipe!! I am gluten-intolerant, I avoid sugar, and I’m transitioning from veggie to vegan. Although things are getting better it’s still hard to come by tasty treats when I’m out and about.

I made these on a Saturday morning saturated with work to do and life admin to be ticked off (three words: Ikea Bed Build).

So if you like cinnamon rolls (or cinnamon buns – whatever you fancy) – and you like chai, you’ll LOVE this. I adapted a traditional recipe and added a few chai spices to make it really pop.

1/ Heat the oven to around 180c. Take the pastry out of the fridge and let it warm up to room temperature.

2/ Roll the pastry (if applicable) or just lay it out on a nice big wooden board. Brush over the melted ‘butter’ until the whole surface is covered.

3/ Sprinkle over the sugar evenly. Then follow with a liberal amount of cinnamon to coat the pastry twice.

4/ Sprinkle on a little nutmeg and a little cardamom. Be less liberal than you were with the cinnamon here!

5/ Carefully roll your pastry from the shortest side into a big long sausage.

6/ Use a super-sharp knife to slice inch-thick rolls from the sausage. Lay them on a buttered tray and pop them in the oven for around 20 minutes, until golden brown.

7/ Try not to eat a whole batch of cinnamon rolls in one go!! 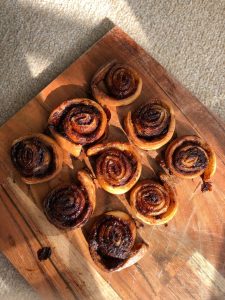 Want £5 off your next order?

Sign up to our newsletter and get £5 off your next order with us :) No spam, just delicious chai recipes, first-look sales, product launches and more about our charity work and philosophy.