by Aura Chai
in About Chai Latte

Chai latte vs chai tea – they’re both the same thing

Let’s get it straight before we begin – when people say ‘chai latte’ and ‘chai tea’ they usually mean the same thing. They’re referring to that warm, comforting, spicy, milky deliciousness. The one that feels like a lovely big hug in a mug. They sound the same, and they are the same. But there’s a catch. One is wrong, and the other is right. So which one should you be saying, and which one doesn’t make any sense?

In various cultures, (but most importantly for the purposes of this blog) in India, chai means tea. More specifically ‘chai’ translates to tea in Hindi, which is .  Hindi, cha  . So ‘Chai tea’ is a misnomer – it doesn’t actually make sense. So if you want to sound all big and fancy when you order a chai, make sure you say ‘chai latte’, not chai tea 😉 If you want to be most accurate, you can say ‘masala chai’, or ‘masala chai latte‘, which translates to ‘mixed spice tea’ or ‘mixed spice tea latte’.

It’s not really a questions of ‘chai latte vs chai tea’, because they’re not different things you can compare to one another. They’re one and the same.

So when people say ‘chai tea’, they’re saying ‘tea tea’….but it’s a really common way people refer to chai latte, or masala chai to give it its most correct name, here in the UK. If you’ve been saying ‘chai tea’ then you’re halfway there – it is made with tea!

So what is chai latte?

Chai latte is a milky drink made with black tea and mixed spices. Just like your Mum’s Sunday Dinner or your Nanna’s lemon loaf, every family tends to have their own recipe, and everyone thinks theirs is the best. If you’ve been to India, you’ll know that on every street corner there are ‘chai wallah’, tea sellers sitting beside huge vats of delicious hot chai. It’s super common, doesn’t come with choice of whipped cream or flavoured syrup, and won’t set you back $4.50. Masala chai is often super rich and mega sweet – it’s made with condensed milk and whole milk and plenty of sugar.

If you haven’t been to India, you can be forgiven for being a bit confused about what chai latte is, and why it’s called a latte when it’s not coffee. (we actually wrote a blog allll about this here). It’s gained the name ‘latte’ because it’s usually made with more milk than water – just like a coffee latte or caffe latte. In India it’s common to drink masala chai like a classic British cuppa – with a little milk, or none at all. Which confuses things more, I know – but usually in the West you’ll encounter chai with plenty of milk. 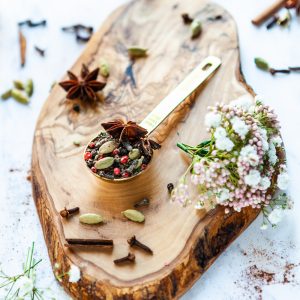 How to spot a traditional chai latte

If you’re asking about chai latte vs chai tea, I’m guessing you’re interested in chai latte. Which means you might be keen to know where it comes from, and how to enjoy the tastiest chai imaginable.

Chai latte in the UK, USA and even in Australia falls into two camps. It’s either authentic and traditional, or it’s more commercial, ‘instant’ blends.

Real chai is aromatic and fragrant. As soon as you open the packet, you’re transported to another world. It’s a treat for allll the senses – made with whole spices you can actually see, and loose leaf black tea. Instant chai is usually a bland-looking beige powder. It smells alright, but it’s much less pungent than the real deal. It doesn’t look exciting, and it rarely tastes exciting, either. If you look at the ingredients list you’ll usually find refined white sugar and fillers like Maltodextrin high up on the list, followed by a handful of spices, usually cinnamon and ginger.

You don’t need me to tell you that these blends do chai a disservice. It’s ended up with a bit of an unfairly negative reputation for being unhealthy and full of sugar, which is a huge shame! Would you be surprised if I told you that real chai is actually super healthy? That it was originally created as a medicine thousands of years ago?

To demonstrate my love for authentic chai I will tell you a little story. If you’re not into stories, skip over this bit!

When I set up Aura Chai I started by developing my blends and concentrated on creating a product I loved to pieces and knew others would love, too. Then I set up a website to help me share my chai with more people around the world. At this stage it was suggested to me that I should refer to my lovingly created blends as ‘chai tea’ or ‘chai tea latte’ – because that’s what most people know them as. That’s the popular way. That’s what Starbuck’s calls it, after all. But I stood my ground because being authentic is important to me.

For me it’s super important to celebrate the origins of chai and I would be doing my ancestors and my business (and most importantly CHAI) a disservice. So I stuck to my guns! And now we’re the only authentic, vegan, sugar-free chai latte brand in the UK. I write about authentic chai and share my message to spread the word about traditional chai and its healthy origins.  If you want to know more about where chai comes from, and its history as an Ayurvedic medicine, check out this blog.

We can’t show you the difference between real chai and ‘fake chai’ without you actually tasting it for real, but we can give you an idea. This is one of our lovely Google reviews: 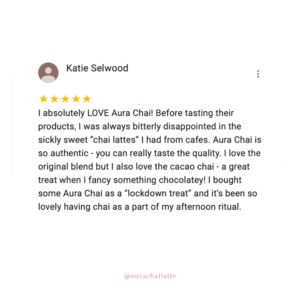 Chai latte vs chai tea – got more questions? Get in touch today!

Want £5 off your next order?

Sign up to our newsletter and get £5 off your next order with us :) No spam, just delicious chai recipes, first-look sales, product launches and more about our charity work and philosophy.